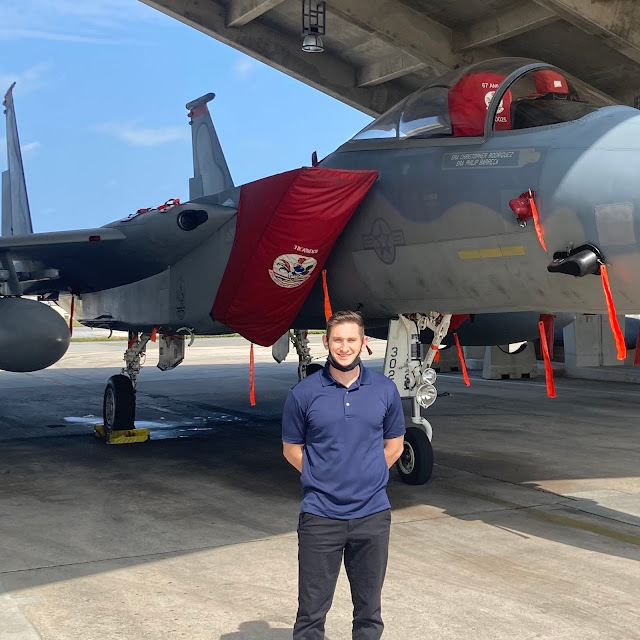 What is the Weirdest / Wildest / Most Interesting / Out there AT job you’ve ever worked: Athletic Training Intern for the Philadelphia Eagles
What has been the biggest change in the year of the pandemic: Moving to Japan
Share your best Moment / Story / Anecdote as an AT: A football athlete who I was overseeing found a second opinion on an injury and that second opinion was recommending surgery in the following 3 days. The parents weren’t in full agreement with the injury and got another opinion from my team. The athlete played football that week and scored 3 touchdowns and about 200 yards of offense. My goal as an athletic trainer is to make you forget you ever had an injury. With a proper plan, evaluation, procedure, and attention to details you can help to change the life of anyone.
Quote/Lyric/Line that sums up Athletic Training For You: Each injury or condition has an answer, if you can ask the right questions and are an attentive listener with a plan.

How did you find out US Air Force gig?

A friend of mine from Grad School (shout out to Cal U PA) had taken a job with the Marines and then transitioned to a position with the Air Force. She let me know of a new contract that was opening up opportunities for ATs in the military.

What are your primary responsibilities?

Because this is a new position, it is always evolving. Right now I am focusing primarily on injury prevention and recovery. The way things are currently structured, if anything comes up that would require an eval, I refer out. That has certainly been an adjustment, but as the skill set of athletic trainers becomes more evident, the responsibilities should grow.

Right now I work 8-5. We’re not allowed to do any overtime. Each day prior to their flight we go through a pre-flight warmup plan. This incorporates neck and back mobility and strength as well as core, adductor, and glute activation. Their flight drills can take anywhere from 1-2 to several hours and once they are back on the ground, I take them through a stretching and recovery post flight routine.

As an AT, coming into a new position, and unique situation, how did you prepare for, and approach things early on?

There is a database available with resources specific to pilots and the military/tactical patient. The most important thing for me was to get as much face time early on as I could. I wanted to get to know everyone and educate them on what athletic trainers can do because 90-95% of these guys haven’t had access to ATs before.

What have been some unique challenges that you have encountered

I would say the fact that I have really been incorporating more isometric holds than explosive movements and focusing on activation patterns. These guys are wearing heavy equipment that is constantly pulling them forward, they remain seated for long periods of time, not to mention that they can pull up to 9Gs during these flights. Utilizing my background and being able to focus on foundational control has been incredibly important in helping care for these individuals.

How has buy-in been?

Buy-in has been great. This has not been a “one size fits all” treatment approach. We do FMS screening on everyone and are able to institute treatment approaches based on each individual’s needs. After a couple weeks, common soreness and aches and pains have started to subside and they are noticing the benefits of what we are doing.

I’m sure everyone wants to know…have you been on a flight yet? Not yet. It would be a dream come true if somehow I get to go on a flight.

What has been the most impactful for you during this?

These guys are essentially giving up their lives for our freedoms, so I take their well being much more personally than I did working with more traditional sports. They are constantly going through emergency protocols as well as mental checklists for the plane while they are in the air so it is paramount for me to do my job so that they can focus on theirs.

I have never really been the type to plan too far ahead. I always wanted to work with the military so this was an opportunity that I jumped at. Right now this is an at-will contract, but I plan on putting in 3 or so years and get out as much as I can. After that? Who knows. Maybe getting back into the NFL, but I am just taking each opportunity as it comes. The military will be another viable avenue for ATs in the future. They appreciate what ATs do and are consistently adding more positions.

Is this something you would recommend to other ATs?

Absolutely. There are growing pains, just like there are with any new position, but they appreciate us. The Marines have added 4 to 5 AT positions on their base in Japan in the last couple of months. The Air Force is following suit. I foresee more positions like this one coming available in the near future.

Need an athletic trainer? Go4Ellis is a nationwide app/platform that connects teams and organizations with per diem athletic trainers for games, practices, camps, clinics and tournaments.
For more information, or to find and hire an athletic trainer, visit go4ellis.com.
If you’re an AT looking to pick up a shift or two, click the links below to download the app.

Go4Ellis is the preferred per diem platform of the National Athletic Trainers’ Association.
Every sideline. Everywhere.